As the regime in Beijing becomes ever more repressive, never has the need to pray for that great nation been greater. 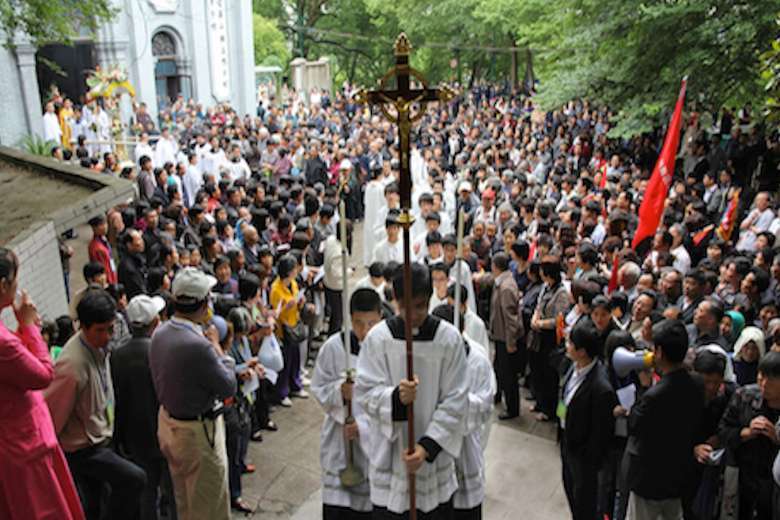 Six weeks after his own country was plunged into bloody turmoil following the military coup d’etat on Feb. 1, he issued a call for a Global Week of Prayer for China. One would have understood if he had chosen to focus solely on Myanmar’s crisis, but even as the streets around his residence at Yangon’s St. Mary’s Cathedral resounded with gunfire, he perceived the need for the world to pray not only for Myanmar but for the people and Catholic Church in the big power next door.

In a March 14 statement in his capacity as president of the Federation of Asian Bishops’ Conferences, Cardinal Bo urged the faithful to extend the annual Worldwide Day of Prayer for the Church in China, designated in 2007 by Pope Benedict XVI as May 24 — the Feast of Our Lady Help of Christians — to a week of prayer.

While referencing his own country’s plight, he focused on humanity as a whole and the interconnectedness of the world today. “Many parts of the world are currently challenged, including my own country of Myanmar at this time, but in a spirit of solidarity it is right to focus not only on our own challenges but to pray also for others, in the clear knowledge that their well-being is closely linked to ours,” he said.

Cardinal Bo emphasized the importance of prayer for both the Church specifically and all the peoples of China, saying: “Since the start of the Covid-19 pandemic, the peoples of China have faced increasing challenges, which impact us all. It is right that we should pray not only for the Church but for all persons in the People’s Republic of China. We should ask Our Lady of Sheshan to protect all humanity and therefore the dignity of each and every person in China.”

He added: “In proposing this Week of Prayer, I am expressing my love for the peoples of China, my respect for their ancient civilization and extraordinary economic growth, and my hopes that as it continues to rise as a global power, it may become a force for good and a protector of the rights of the most vulnerable and marginalized in the world. Pope Francis rightly reminds us that there is also a deeper hunger, the hunger for a happiness that only God can satisfy, the hunger for dignity. I am calling for prayer for each person in China, that they may seek and realize the full measure of happiness that our Creator has given to them.”

Last week we launched a website, GlobalPrayerforChina.org, which features resources for parishes and individuals, including up-to-date information on the persecution of Christians in China as well as the genocide of the Uyghurs, repression in Tibet, the dismantling of democracy and human rights in Hong Kong and other injustices and threats to human dignity throughout China. It includes profiles of individual prisoners of conscience and pastoral resources for prayers and homilies.

Cardinal Bo’s call is timely as China faces the most severe repression since the Tiananmen Square massacre of 1989 and the worst assault on religious freedom since the Cultural Revolution. The Chinese Communist Party regime has always violated human rights, but there was a time — in the 1990s and the first decade of the new millennium — when China appeared to be on a path of some liberalization, albeit within certain limits. Under Xi Jinping’s rule, however, the regime has cracked down on all dissent, shut down all remaining space for civil society and independent media, rounded up human rights defenders, and launched a new war on faith.

Today it stands accused by the United States administration, the British, Dutch and Canadian parliaments and a growing number of international experts of genocide against the Uyghurs, forced organ harvesting from prisoners of conscience including Falun Gong practitioners, intensifying repression in Tibet, and dismantling Hong Kong’s freedoms and autonomy in total breach of the Sino-British Joint Declaration.

Meanwhile, Christians in mainland China — Catholic and Protestant — endure growing persecution. Thousands of crosses have been destroyed in recent years, while churches have been closed or destroyed — in some cases even dynamited. In state-controlled churches, images of Xi Jinping and Chinese Communist Party propaganda banners are displayed alongside — or sometimes instead of — religious images. Surveillance cameras with facial recognition technology are installed at the altar, and young people under the age of 18 are banned from all churches, receiving the sacraments and attending Bible studies.

The Bible is censored from the Chinese internet, and the regime in Beijing is now working on a new translation of the Bible, a version widely expected to include a “reinterpretation” that places Scripture in line with the thoughts of the Chinese Communist Party and Xi Jinping.

An agreement on appointing bishops between the Vatican and China in 2018 has not led to any improvement. Instead, many dioceses in China are without bishops, and some who have been loyal to Rome for decades have been forced to retire in favour of Beijing’s appointees. Catholic or Protestant clergy who refuse to join the state-controlled churches risk jail.

The Catholic bishop of Baoding Diocese in Hebei province, Bishop James Su Zhimin, is one of the world’s longest-serving prisoners of conscience. In 1996, while leading a religious procession, Bishop Su was taken into police custody and has not been heard of since. He had already been imprisoned for 26 years and severely tortured under Mao Zedong’s rule.

The 70-year-old Catholic bishop Augustine Cui Tai of Xuanhua Diocese in Hebei province has been in detention without due process for most of the last 13 years. Bishop Cui Tai was mostly recently taken into detention on June 19, 2020.

Last September in Jiangxi province, dissenting Catholic priests were placed under house arrest in breach of an agreement to protect clergy from coercion. Priests from Yujiang Diocese, under surveillance, were forbidden from “engaging in any religious activity in the capacity of clergy” after they refused to join the regime’s so-called “patriotic church”, while Bishop Lu Xinping was barred from celebrating Mass.

Among Protestants, Pastor Wang Yi, one of China’s most prominent Christian voices and founder of the underground Early Rain Covenant Church in Chengdu, was sentenced in December 2019 to a nine-year prison term. Not long before he was jailed, he commented that the regime has launched “a war against the soul” but added that in so doing they have “established for themselves an enemy that can never be detained, can never be destroyed, will never capitulate nor be conquered: the soul of man.”

Cardinal Bo is the highest-ranking Catholic leader to call for prayer for China since Pope Benedict XVI’s letter to the China Church in 2007. As Asia’s leading cardinal, and the shepherd of a church in a poor, conflict-ridden nation on China’s borders which has for decades been ruled by a succession of brutal military regimes and one which, despite enjoying a decade of fragile political reform, has now been plunged back into dictatorship, Cardinal Bo’s voice deserves to be heard.

That’s why I hope, two weeks from today, Catholics and Christians more broadly throughout Asia and the world will respond to his call, individually and collectively. In your private, personal prayers each day during the last week of May, pray for China. And at Mass each day that week, remember China in prayers, homilies and reflections.

As the regime in Beijing becomes ever more repressive against its own people, including the Church, and increasingly aggressive beyond its borders, never has the need to pray for that great nation and its peoples been greater.

* Benedict Rogers is a human rights activist and writer. He is the co-founder and chief executive of Hong Kong Watch, senior analyst for East Asia at the international human rights organisation CSW, co-founder and deputy chair of the UK Conservative Party Human Rights Commission, a member of the advisory group of the Inter-Parliamentary Alliance on China (IPAC) and a board member of the Stop Uyghur Genocide Campaign. The views expressed in this article are those of the author and do not necessarily reflect the official editorial position of UCA News.

* The Global Week of Prayer for the Church and Peoples of China will be held from May 23-30. Resources are available at https://globalprayerforchina.org